Featured > Pruett Asks Racecar Drivers & Insiders: Who The Hell Are You?

Pruett Asks Racecar Drivers & Insiders: Who The Hell Are You? 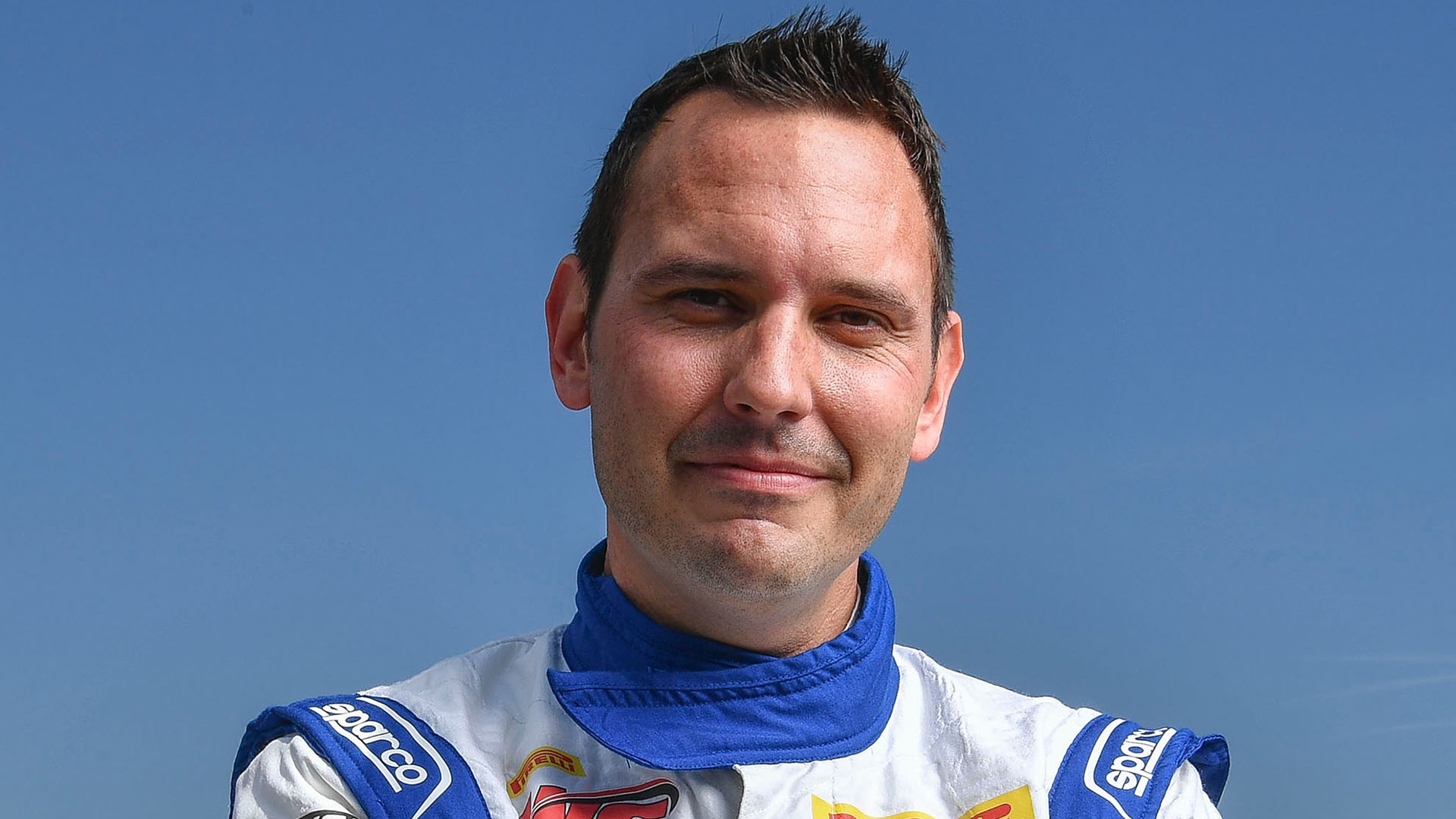 “What would it mean to you to win this race?”

Every racing driver will tell you that journalists ask the dumbest questions. But what would happen if a journalist tried adding a few interesting questions to the mix?

Launching today, Marshall Pruett’s “Who The Hell Are You?” podcast features 50 fast questions that cover a wide spectrum with IndyCar champions, Le Mans winners, stars of IMSA and World Challenge, plus racing television and radio personalities. Also, Justin Bell. With most of the interviewees agreeing to be involved based on a variety of false pretenses, the level of regret is high. 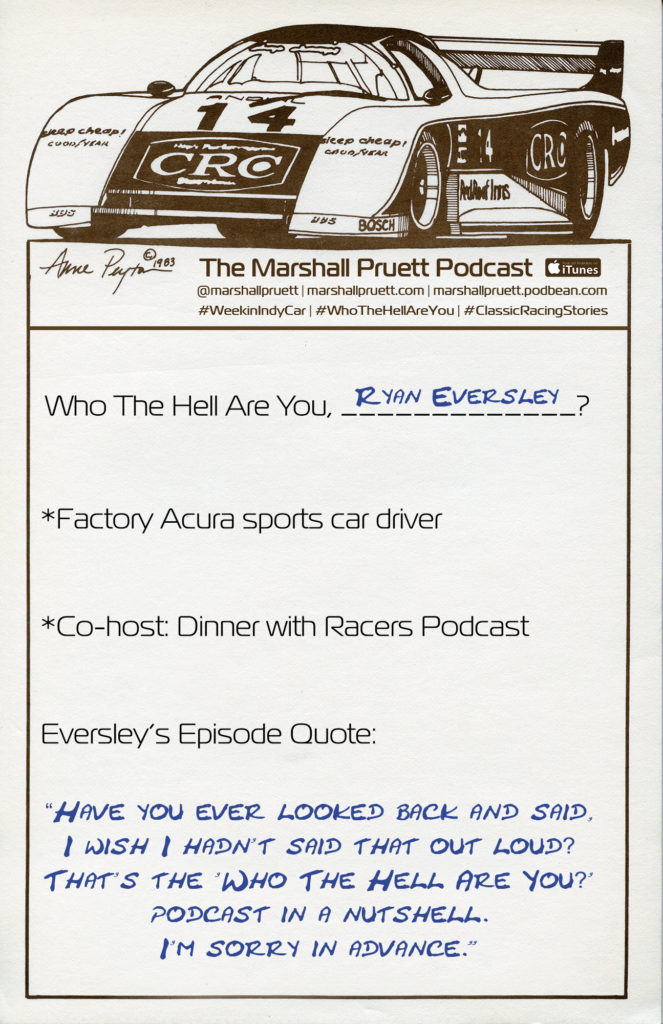 “Have you ever looked back and said, ‘I wish I hadn’t said that out loud?’” Eversley asked. “That’s the ‘Who The Hell Are You?’ podcast in a nutshell. I’m sorry in advance.”

Thanks to plenty of wild responses, listeners will be treated to some intriguing answers and a few confessions. An infidelity was revealed; admissions of theft were made; one driver acknowledged a near-homicidal road rage incident while another tells the tale of being catfished.

Even though it is a racing podcast (Pruett has posted hundreds of past episodes, including the “Week In Indycar,” “Classic Racing Stories,” and upcoming “Strangest Cars I’ve Raced” series), there is only one racing question in Who The Hell Are You? And it appears with all the frequency of a Pastor Maldonado victory.

Why in the world would Pruett want to talk to racing people about everything other than racing?

“The idea came from a chat with Scott Dixon a few years ago when we found ourselves on the topic of current TV shows,” said Pruett. “He mentioned he was a big fan of the A&E crime series The First 48, and at the time, I was convinced I was the only person in our world of racing who knew it existed.  I came away from the conversation wanting to find more connective topics and viewpoints with people in our sport that have nothing to do with racing. Fifty questions and 15 guests later, I hope some of them will still talk to me next season…”

At less than 30 minutes each episode, the 15-part series will launch a new installment every Tuesday  leading up to January’s 2018 Rolex 24 At Daytona. Just in time for the holidays, the launch schedule will feature a pair of double-drop weeks for Christmas and New Year’s. Your family will thank you–mostly for putting on headsets and being quiet (save for the laughing).

Click here to grab the debut episode with Ryan Eversley.

Every installment of “Who The Hell Are You?,” along with the Marshall Pruett Podcast’s back catalog of 200 episodes, is available on iTunes,  Podbean, and at http://marshallpruett.com/category/podcasts.

Each Marshall Pruett Podcast episode is free for use as embedded media:

Who the Hell Are You? Interview List and Quote Board:

1. Patrick Long, World Challenge sports car driver: “At one point I thought to myself: ‘this must be what it’s like to take a polygraph.’  MP was sitting across from me with a stonecold stare as I fumbled on some of my answers. Racing drivers are known to be pretty vanilla, and that’s a damn fair assessment. MP takes a brilliant swing and lets the listener in on a lot more than how the car ran or who the driver would like to thank! I walked out of the interview thinking ‘damn, I need to get out more!’”

2. Sebastien Bourdais, IndyCar driver: “Not sure who you will learn more about, Marshall or me, but it is definitely worth a good laugh.”

3. Joey Hand, IMSA sports car driver: “Well this should be fun! Who the hell are these race car guys you ask? All I’ll say is I’m thankful this wasn’t filmed because there were a lot more shenanigans going on that you couldn’t un-see.”

4. John Hindhaugh, Radio Le Mans broadcaster: “Somewhat cathartic, a cross between a TV game show and an interrogation, without the electrodes obviously…”

5. Ryan Eversley, World Challenge sports car driver: “Have you ever looked back and said, ‘I wish I hadn’t said that out loud?’ That’s the ‘Who The Hell Are You?’ podcast in a nutshell. I’m sorry in advance.”

6. Jordan Taylor, IMSA sports car driver: “What’s so bad about Taylor Swift? I’d be interested in dating her just to see what kind of song she’d write about me.”

7. Ryan Hunter-Reay, IndyCar driver: “It was straight out of left field, and we need more of this kind of stuff in the sport.”

9. Scott Dixon, IndyCar driver: “I filed my first restraining order after this interview with Pruett.”

10. Andy Lally, (vegan and) IMSA sports car driver: “I enjoyed it about as much as I enjoy a good steak.”

11. Will Buxton, Formula 1 pit reporter: “I’ve known Marshall long enough to know that getting involved in this was a stupid idea. But I was wrong-it was worse.”

12. Katherine Legge, IMSA sports car driver: “I really enjoyed this, apart from the last question. My dad is going to listen to this Marshall!”

13. Ryan Dalziel, IMSA sports car driver: “Whenever MP asks you to be involved in one of his projects, you say yes. And as I expected it was a lot of laughing and joking, with just a wee bit of awkward. Had a great time and hope everyone enjoys getting to know who the hell I am.”

14. Townsend Bell, IndyCar broadcaster: “Exposed, afraid, and vulnerable. The most uncomfortable 20 minutes of my life.”

15. Justin Bell, IMSA pit reporter: “Tis a dangerous thing when a man with no boundaries (Marshall) asks a man with no limits (me) questions to gain insight into my life. In our politically correct world I think I need to write two books. One to be read while I am alive. The other when I am truly gone. Chatting with Marshall made me realize the second one is the only one that counts.”

PODCAST: Who The Hell Are You, Ryan Eversley?
Comment
MP 207: Dorsey Schroeder's Dorseyisms