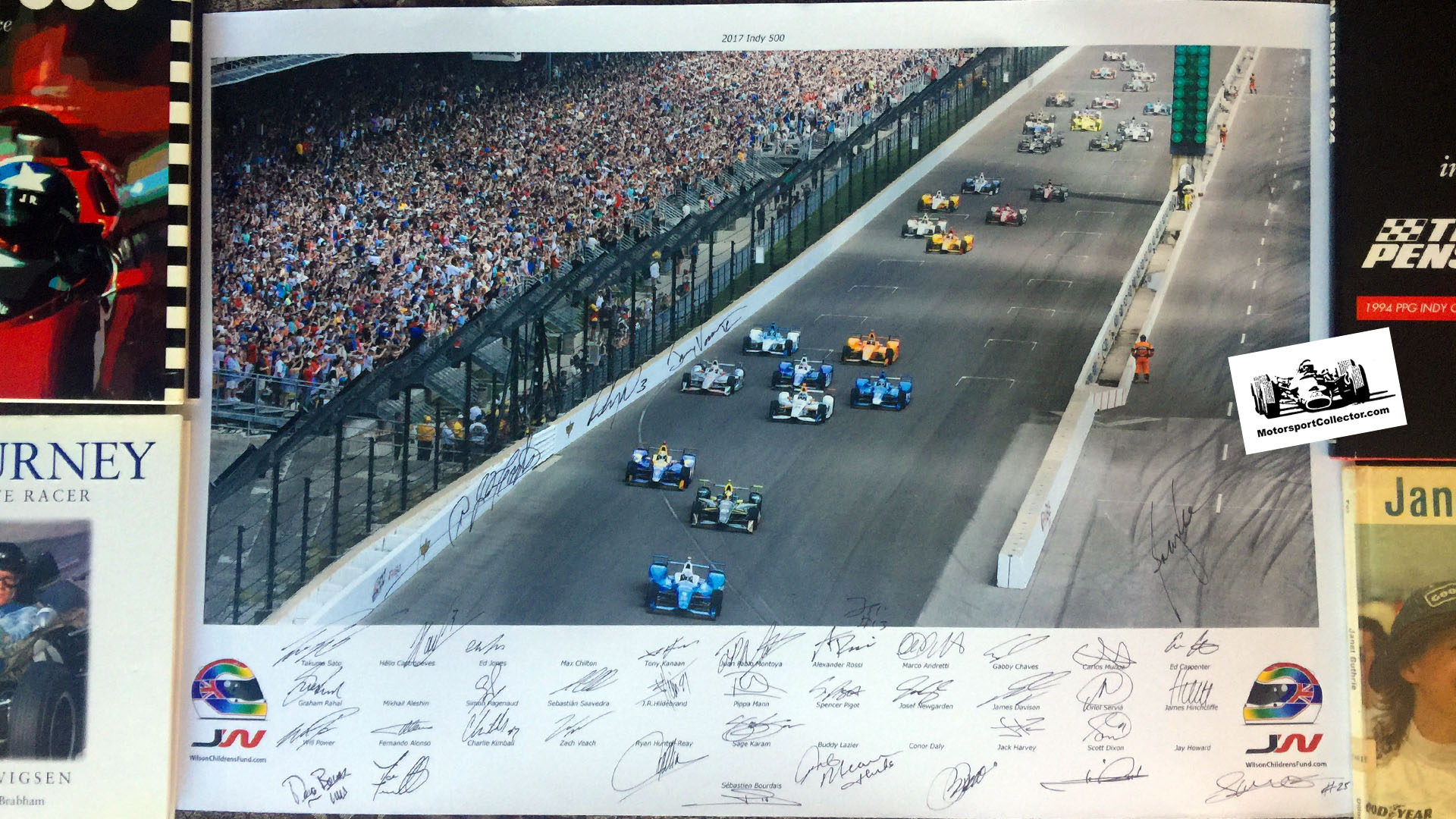 My second annual Wilson Children’s Fund Charity Print initiative is well on its way to being completed. More on that update in a moment.

Let’s start by answering the three most frequent questions I receive before giving a bit of background on how it started and what we’re doing for the 2017 WCF project:

1: When will the prints be available for bidding? December.

2: Where will the bidding be held? Online, through Chicago’s The Motorsport Collector, a peerless memorabilia business owned by Paul Zimmermann.

3: Where does the money go? Direct to the Wilson Children’s Fund, the charity founded in 2015 to look after the financial needs of Jane and Jess Wilson, the daughters of my late and dear friend Justin Wilson. Payment for the prints are made at the WCF site through its PayPal function, which means 100 percent of each winning bid reaches the girls.

In December of 2016, a modest attempt to raise money for the WCF through a silent auction of 12 prints by Paul at TMC generated approximately $11,000 for Jane and Jess. The print, using a start shot from IndyCar’s return to Watkins Glen, had graphics added by Andy Blackmore Design, and with immense assistance from Sonoma Raceway and the Verizon IndyCar Series at the following round in California, the 22 drivers signed each print, along with numerous IndyCar legends and heroes, which increased value and interest. 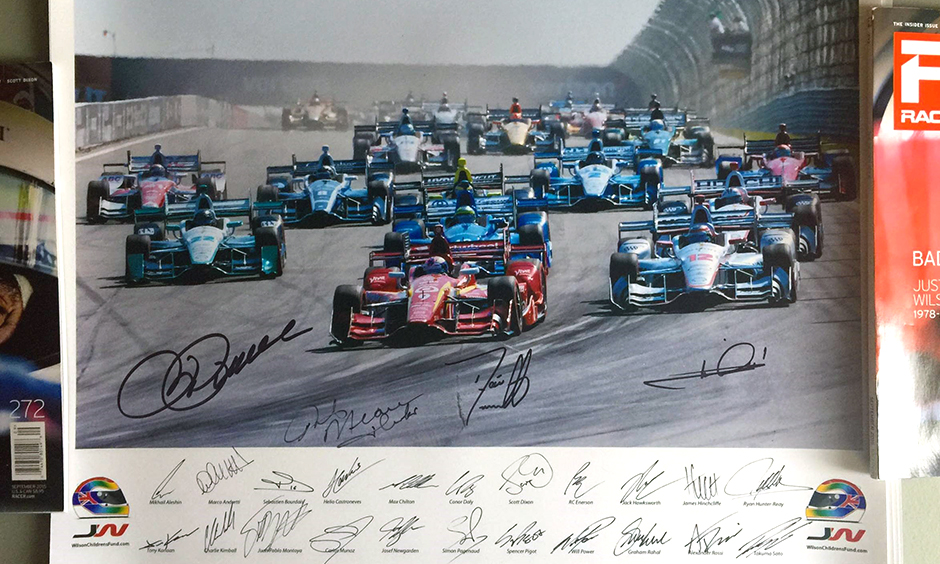 The final step involved Matt Cleary and his Sunday Management Group PR team. Cleary, who served as Justin’s personal PR rep, and continues to represent the Wilson family, sent out a release to drive awareness for the December WCF charity auction, which was picked up by IndyCar.com, RACER.com, NBCSports.com, Motorsport.com, and other key outlets. The collective help, all volunteered, is what put the $11K in the girls’ account at Christmas. That brings us to 2017.

I was stunned by the response last year and loved what we did for the WCF; aiming higher to was the logical response. This year, we should be able to triple that amount, at minimum.

Thanks to the incredible gift of Fernando Alonso racing in the Indy 500, I reached out to my friend Zak Brown at McLaren, and with his immediate support for the initiative, I came up with three different prints–one of the Field of 33 start shot taken atop Turn 1, and two more I took of Alonso–that would be graced by Blackmore’s artistic talent. Sunday Group followed Andy’s work with a new release announcing the 2017 auction that was grabbed by the same group of committed WCF supporters.

Ten prints of each shot, 30 total, will head to Paul at TMC once I add the few remaining Field of 33 driver autographs that are needed.

Due to the size of the field, the print is a giant 20×30 inches, and like the 2016 shot, I’ve been blessed to have more legends and heroes add signatures to the series.

Andy added the three rows of 11 driver names to the print in order of the finish with race-winner Takuma Sato first at the top left, and as a nice touch, he included Sebastien Bourdais as the spiritual 34th starter after his scary qualifying crash precluded participating in the 101st running of the legendary event. So far, we’ve had a pair of four-time Indy 500 winners in A.J. Foyt and Rick Mears sign the Field of 33 series.

Their fellow Indy winners and/or IndyCar champions Mario Andretti, Roger Penske, Bobby Rahal, Dario Franchitti, Paul Tracy and Jimmy Vasser have also signed the prints, along with Justin’s brother Stefan Wilson and IMS president Doug Boles. Time permitting, I might be able to add another legend or two before the auction begins. I’ll do a full accounting of all the championships and Indy 500 victories represented on the Field of 33 prints once they ship to TMC.

The two Alonso-specific prints, done in 16×20, were selected by Zak and they feature signatures from Alonso, Brown, McLaren Honda Andretti co-entrant Michael Andretti, and 2003 Indy 500 winner Gil de Ferran, who acted as Fernando’s driver coach throughout the month of May.

Ten prints of Fernando’s steely gaze from the cockpit of his No. 29 Honda, and 10 more of crossing Indy’s famous yard of bricks during the race below the fabulous pagoda were just signed and completed at the United States Grand Prix at Circuit of The Americas. 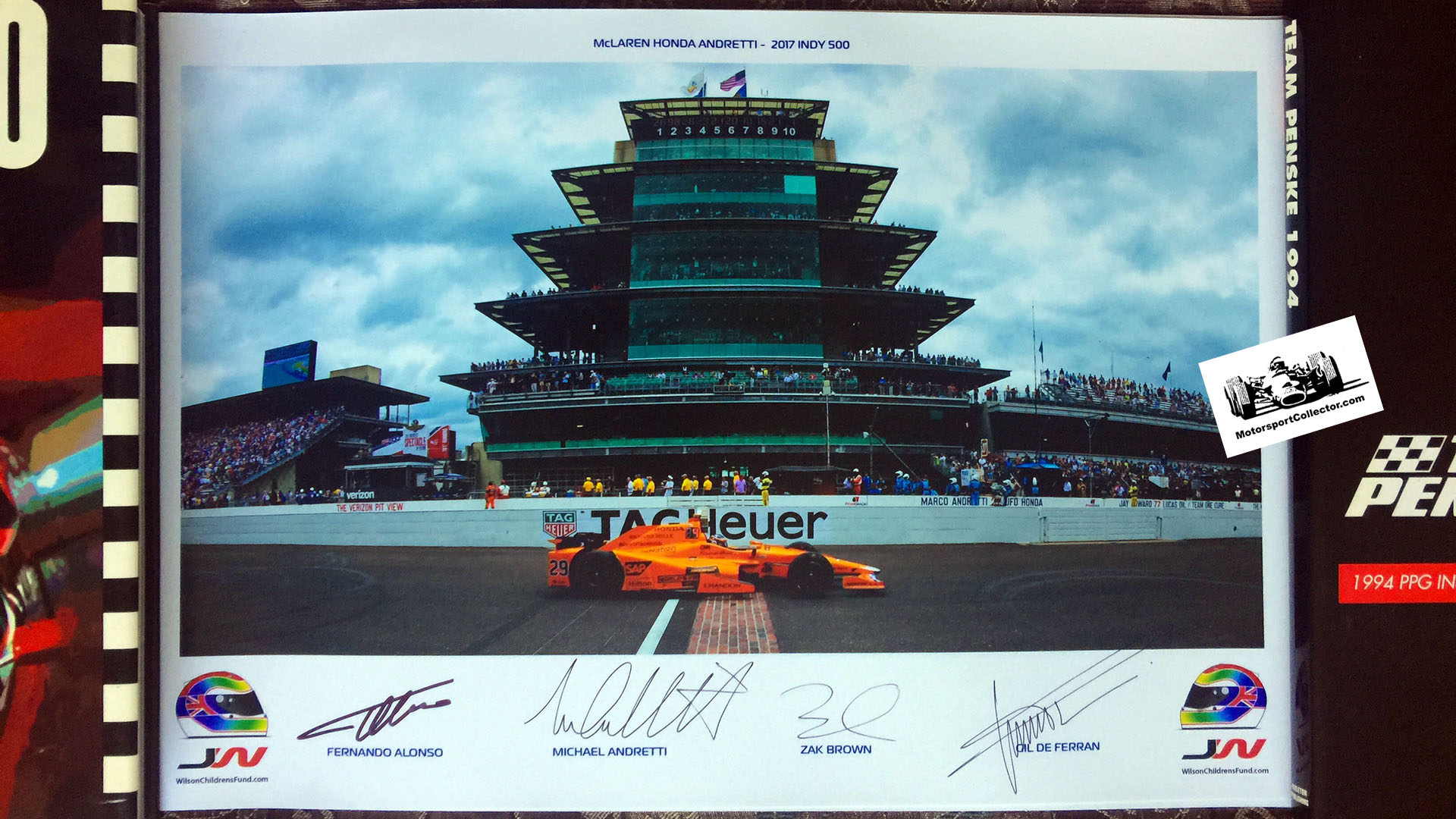 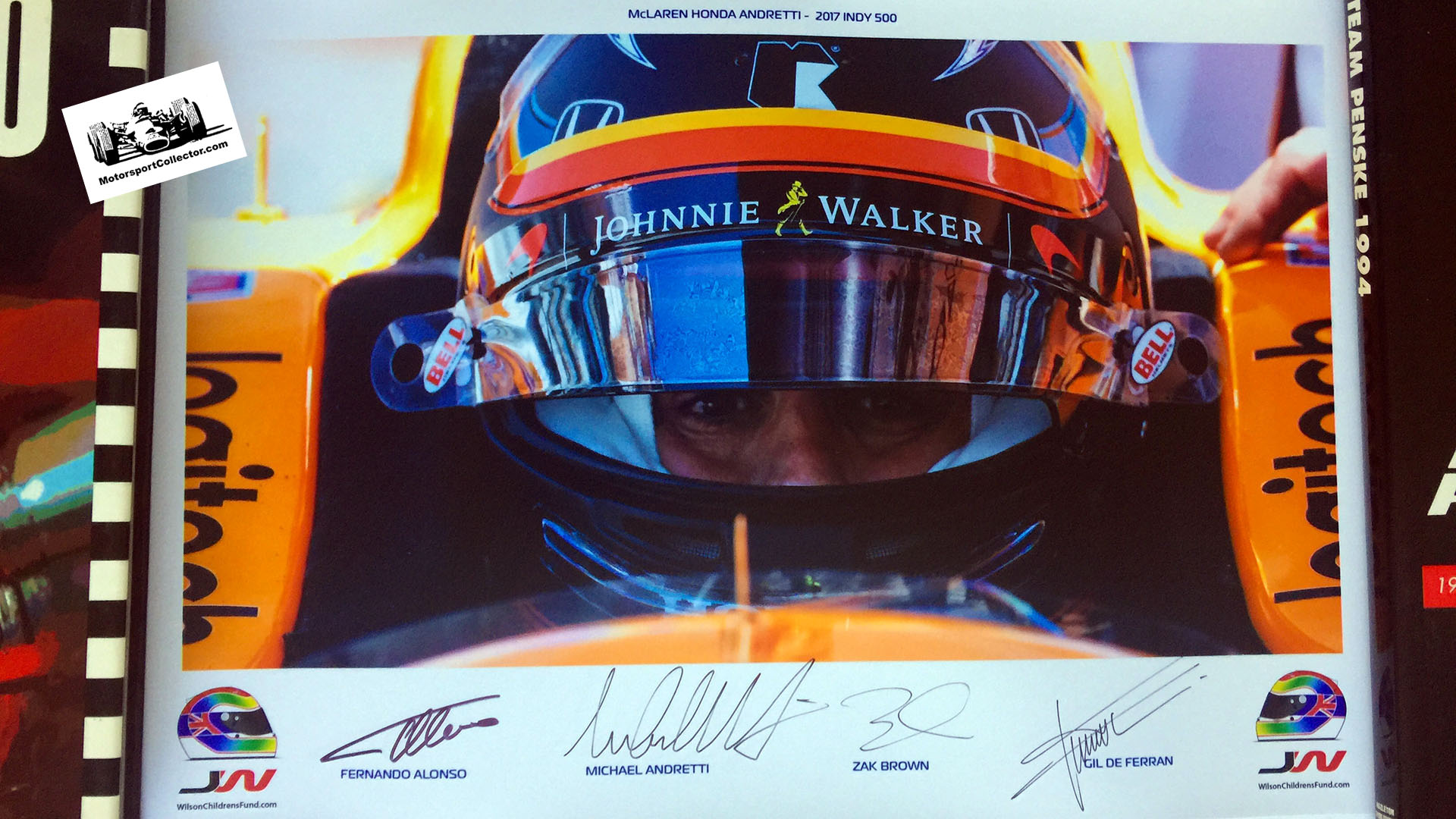 McLaren’s incomparable Silvia Hoffer Frangipane, who received the prints in COTA, ensured they were signed and sent back photos of Fernando and Gil lending their names prior to shipping them home. For those with any questions regarding authenticity, enjoy the photo selections below.

So, that’s the update for October 28. The Alonso prints are ready to go. The Field of 33 prints will head out to the four drivers needed to complete the series, and then all 30 will travel to TMC for the second annual WCF silent charity auction in December.

If you have any questions, please send an email my way: marshall at marshallpruett.com. 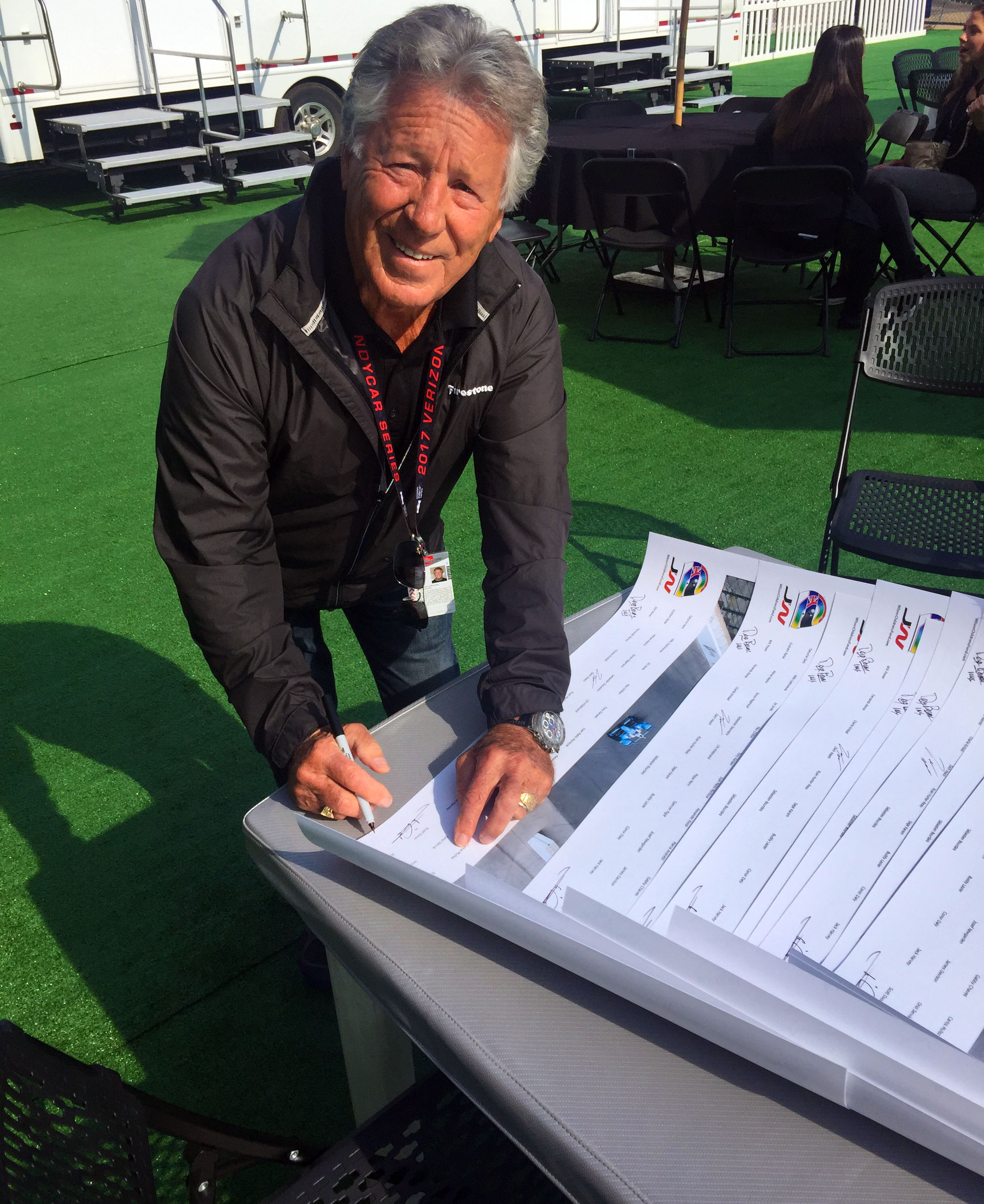 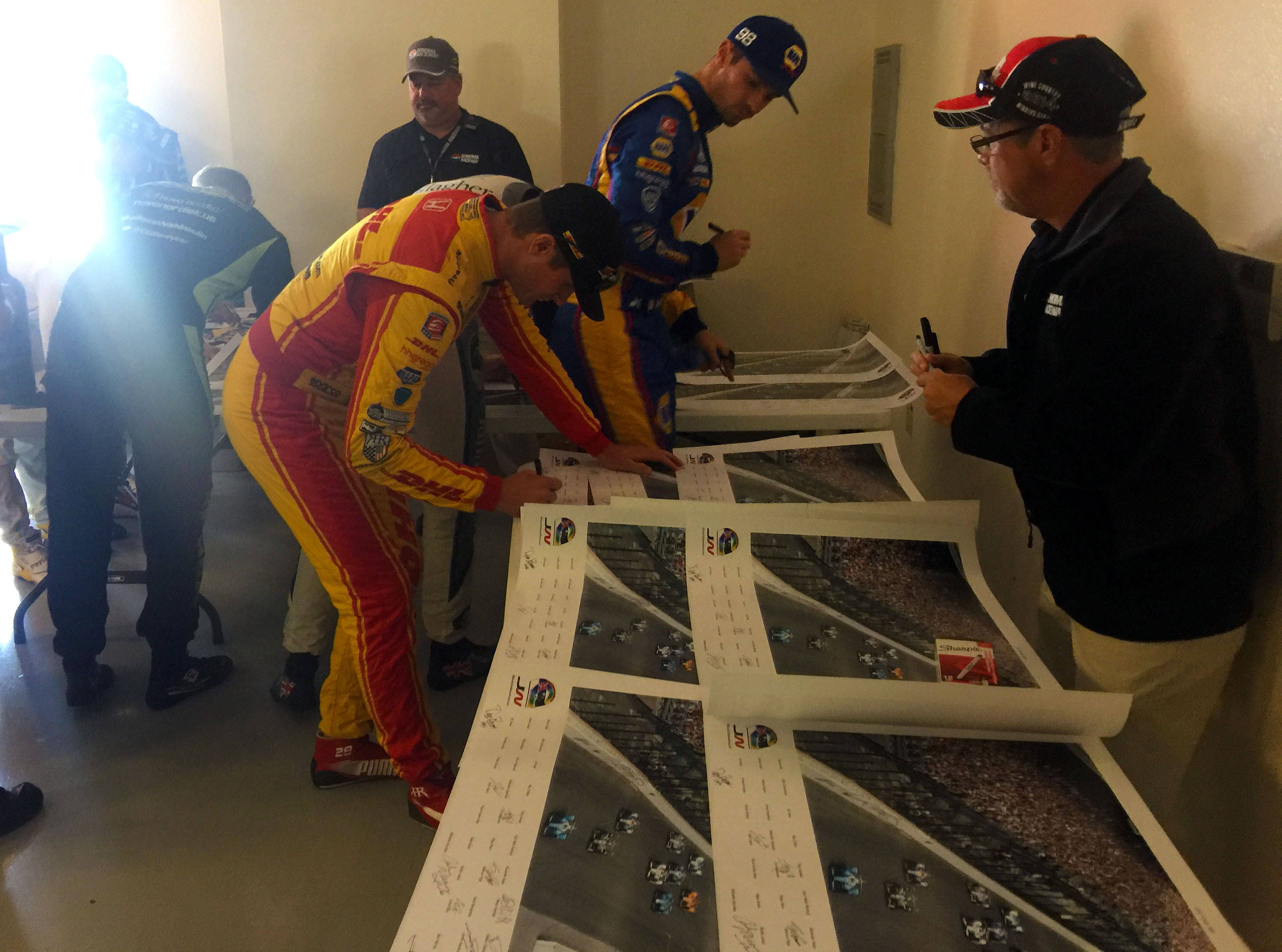 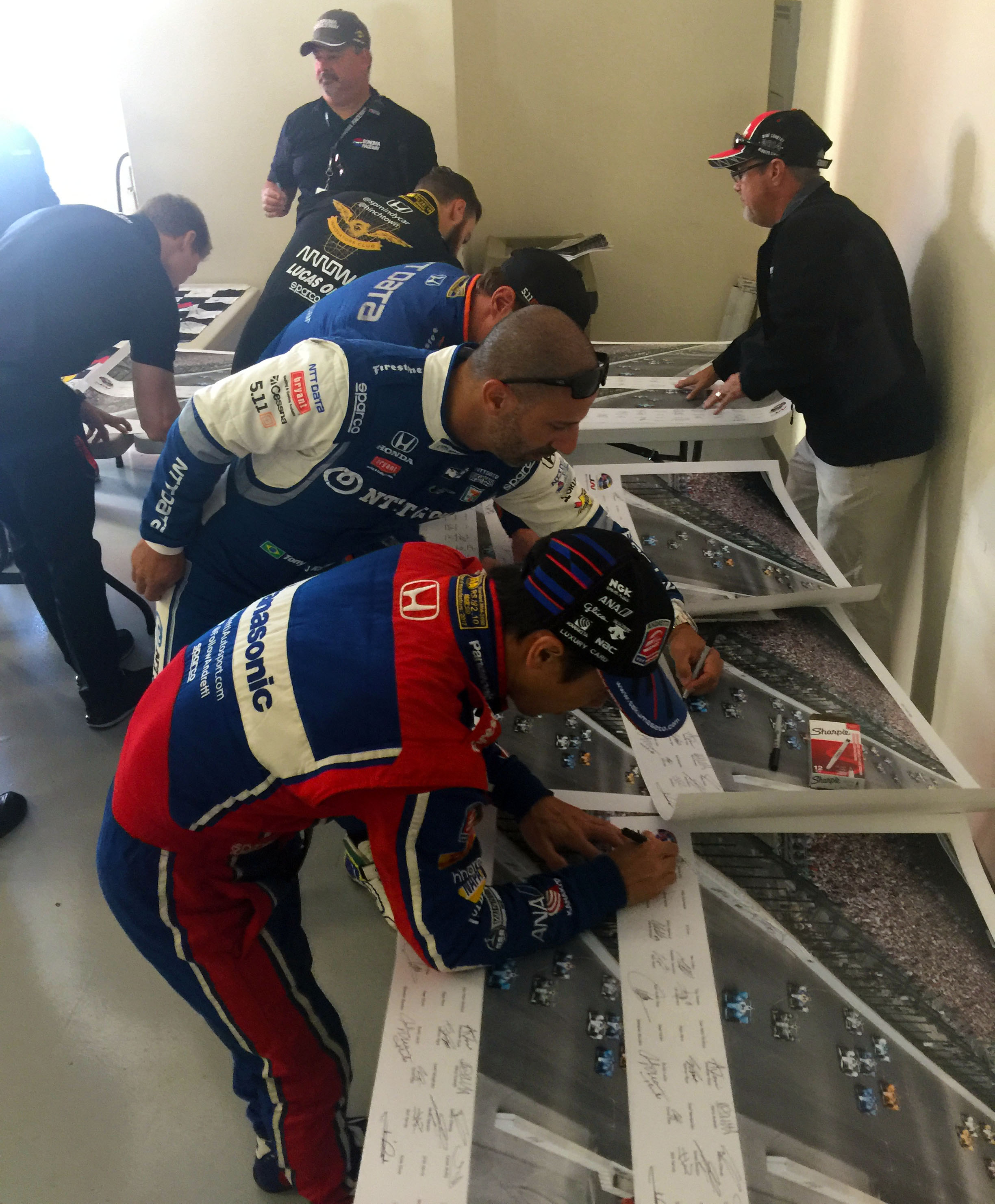 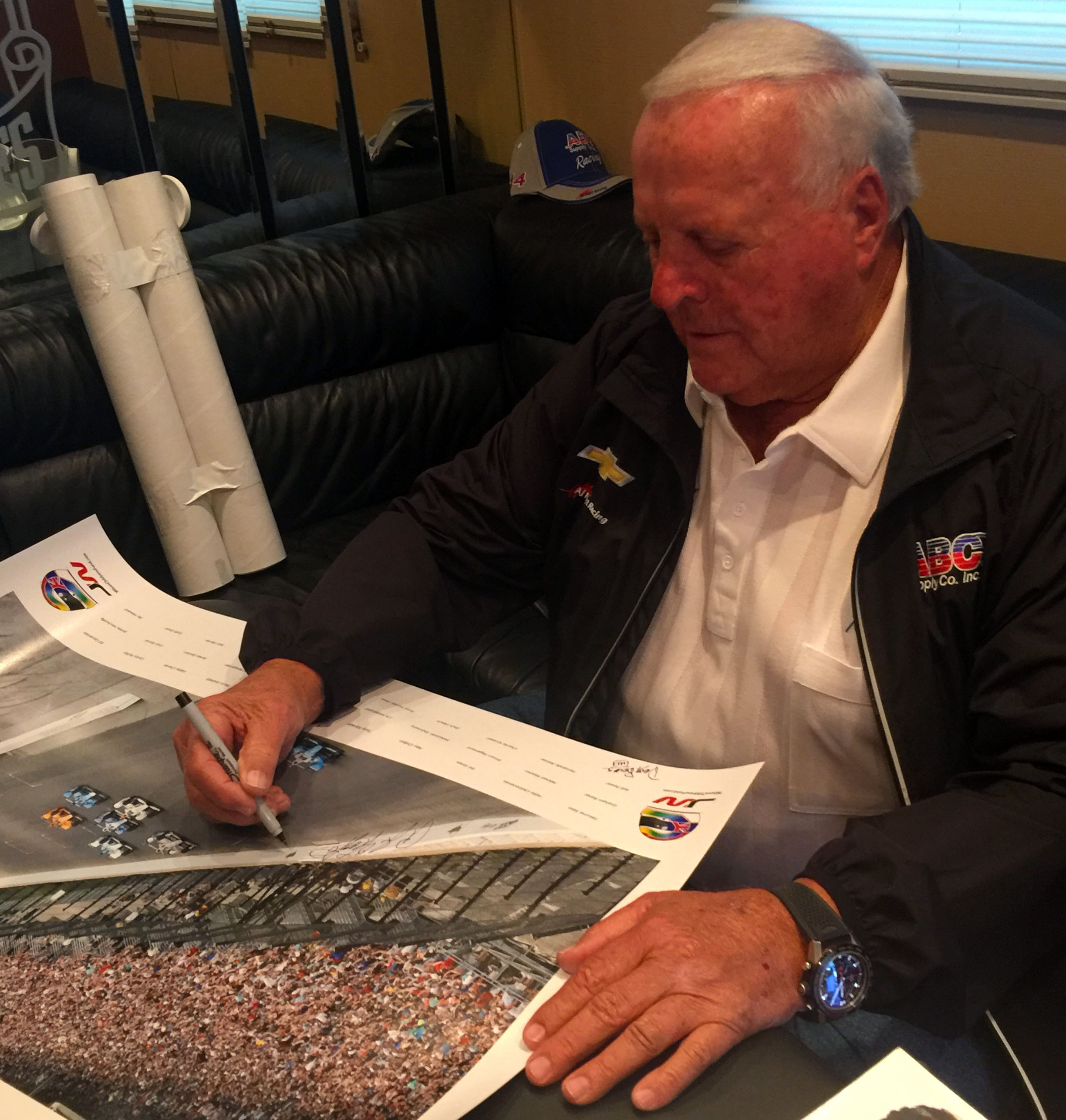 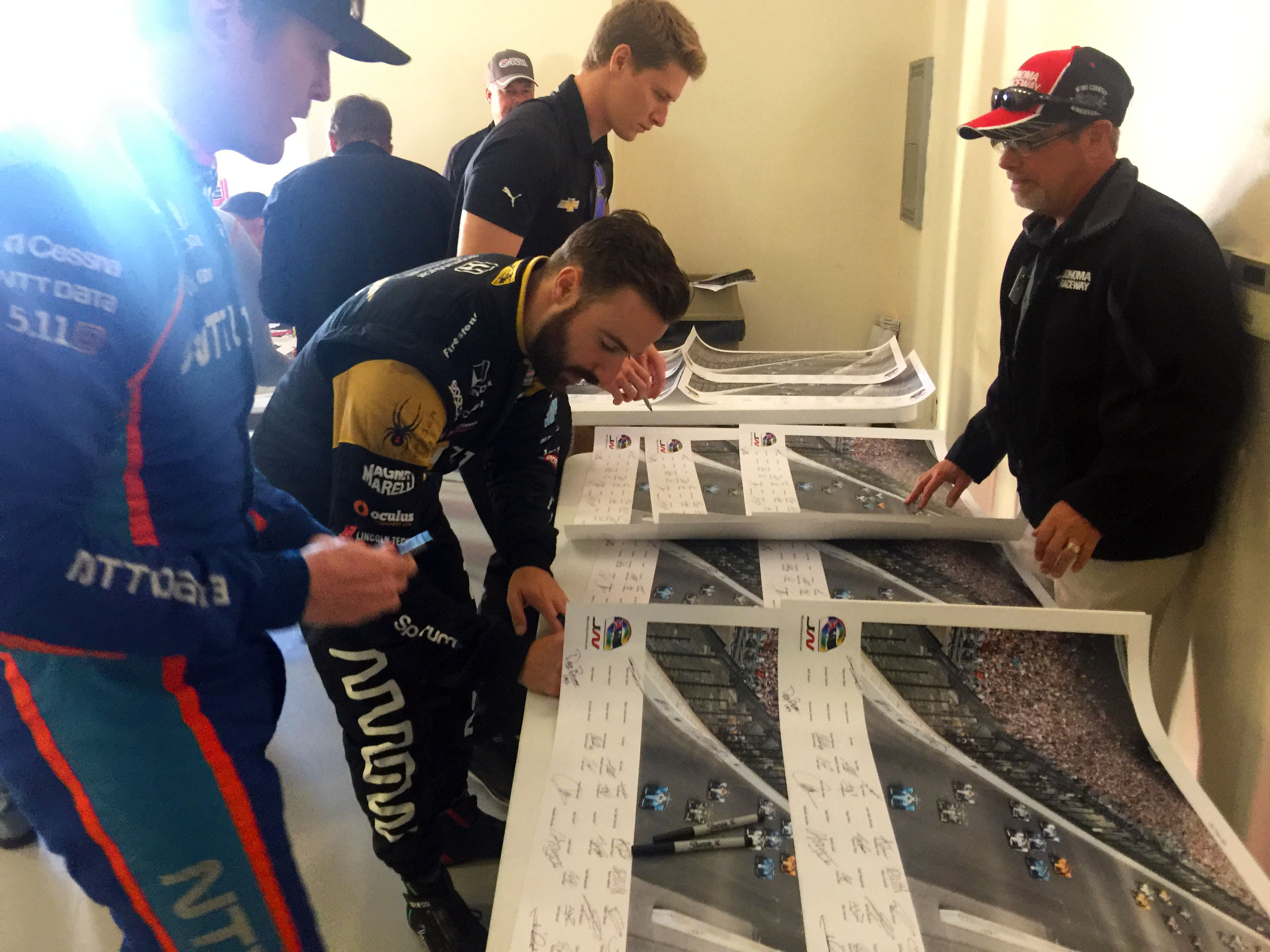 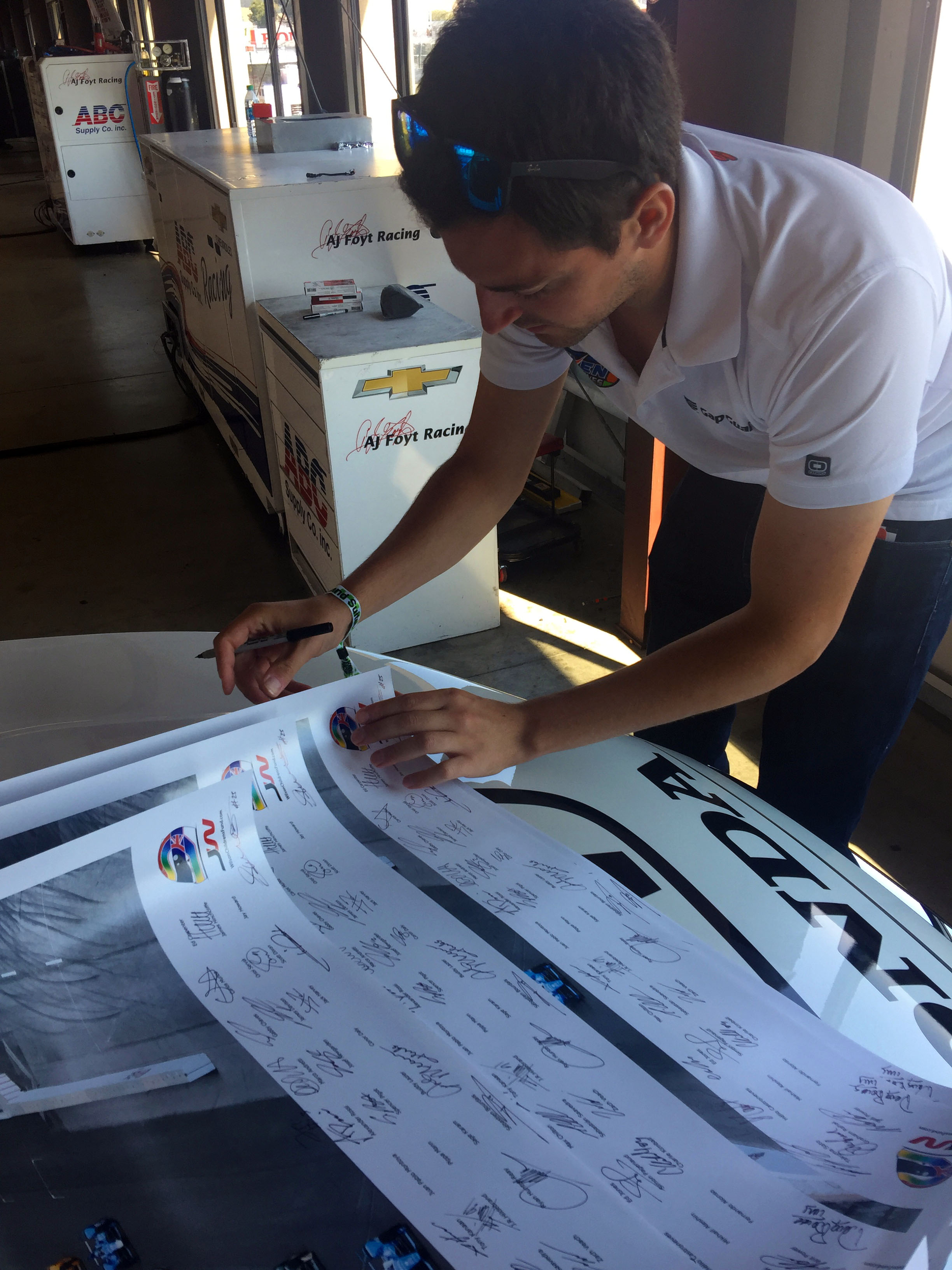 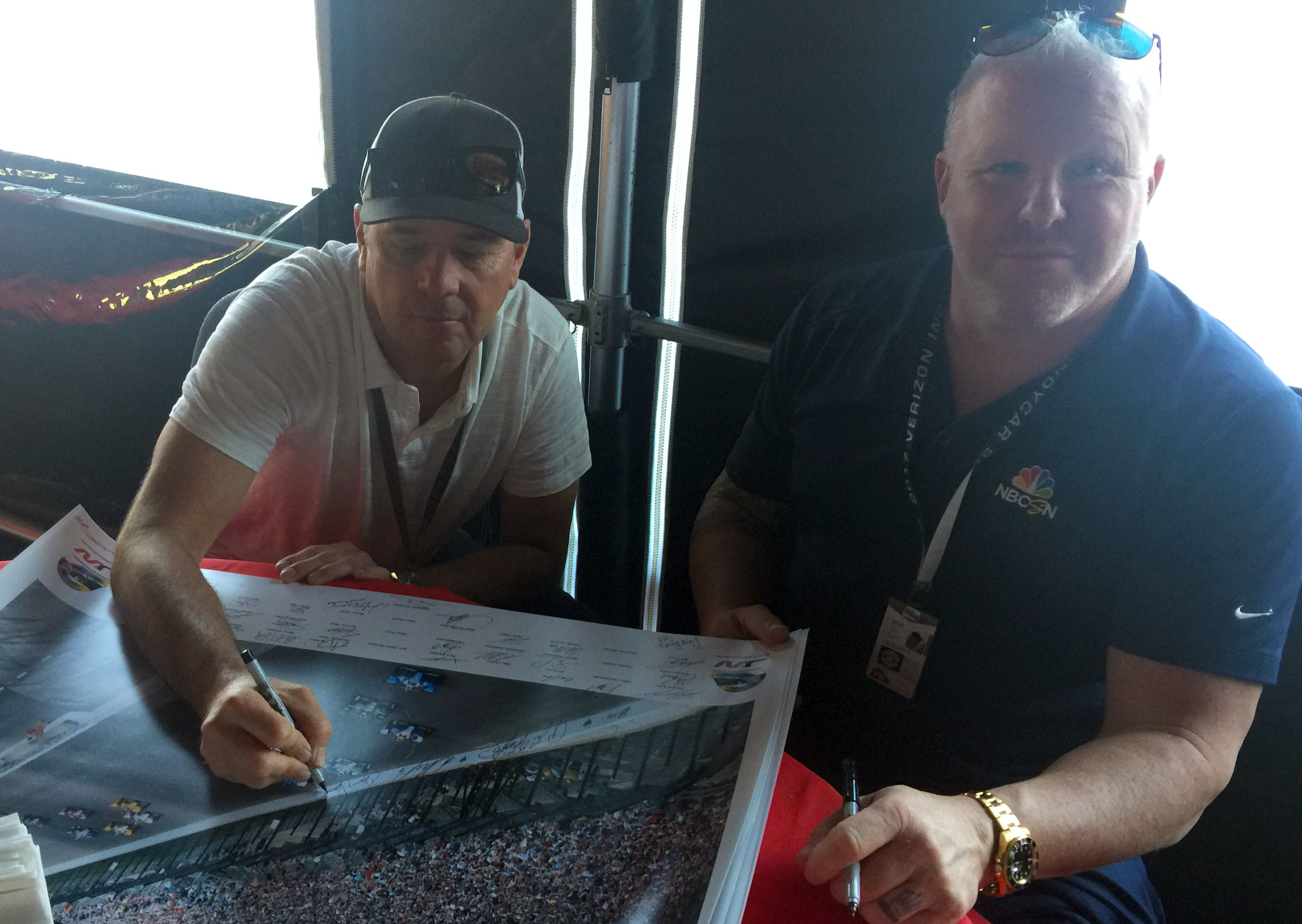 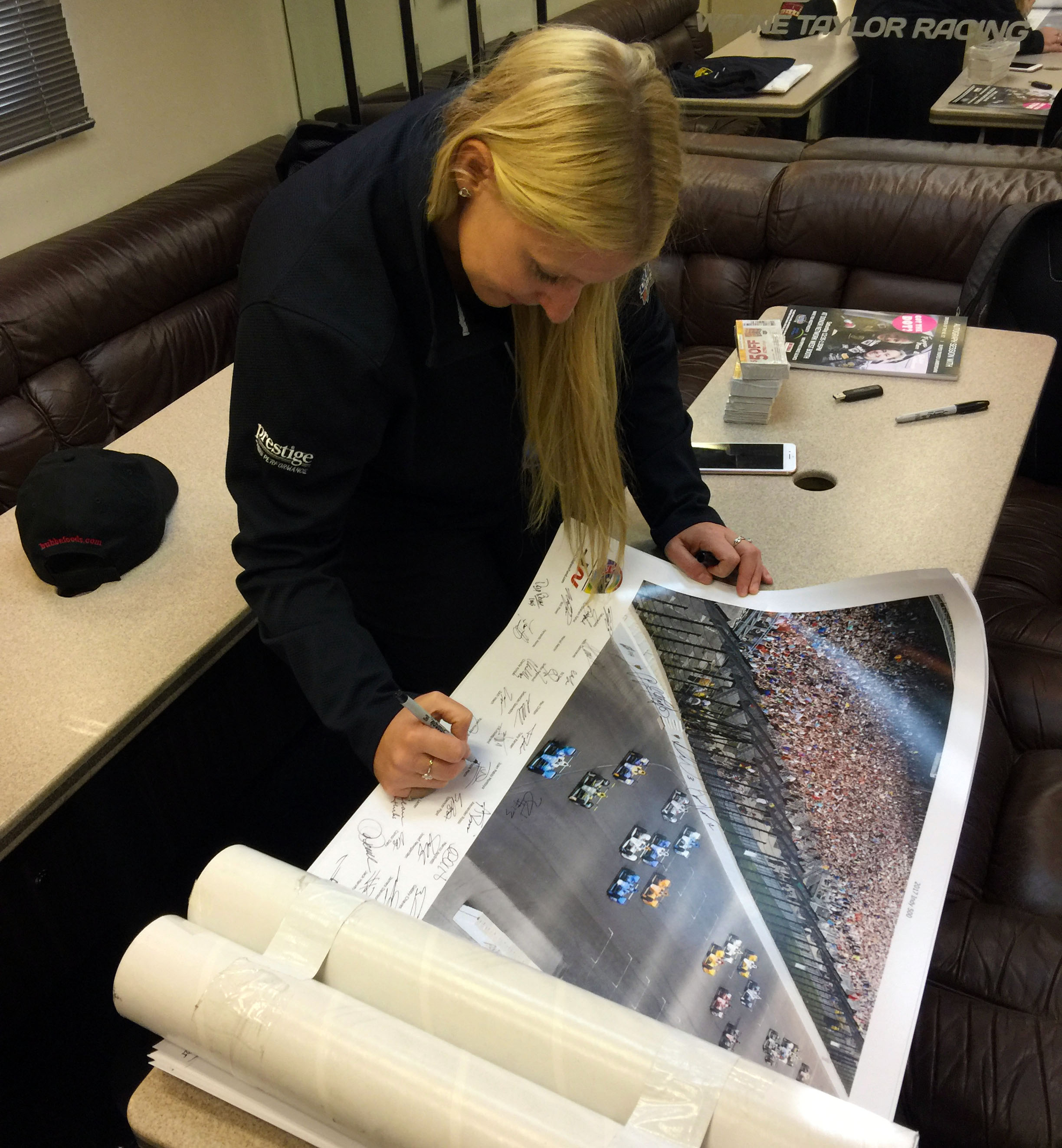 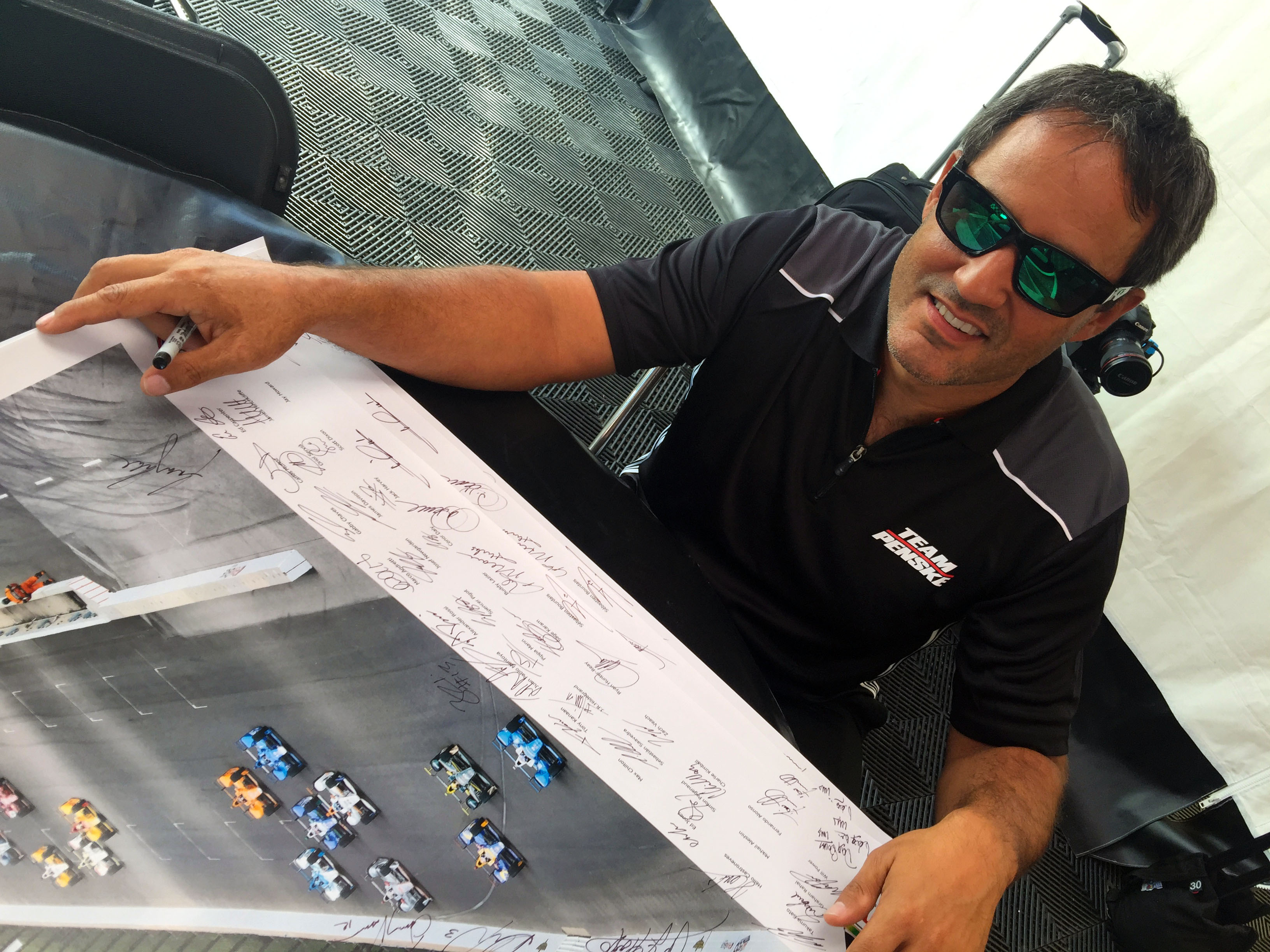 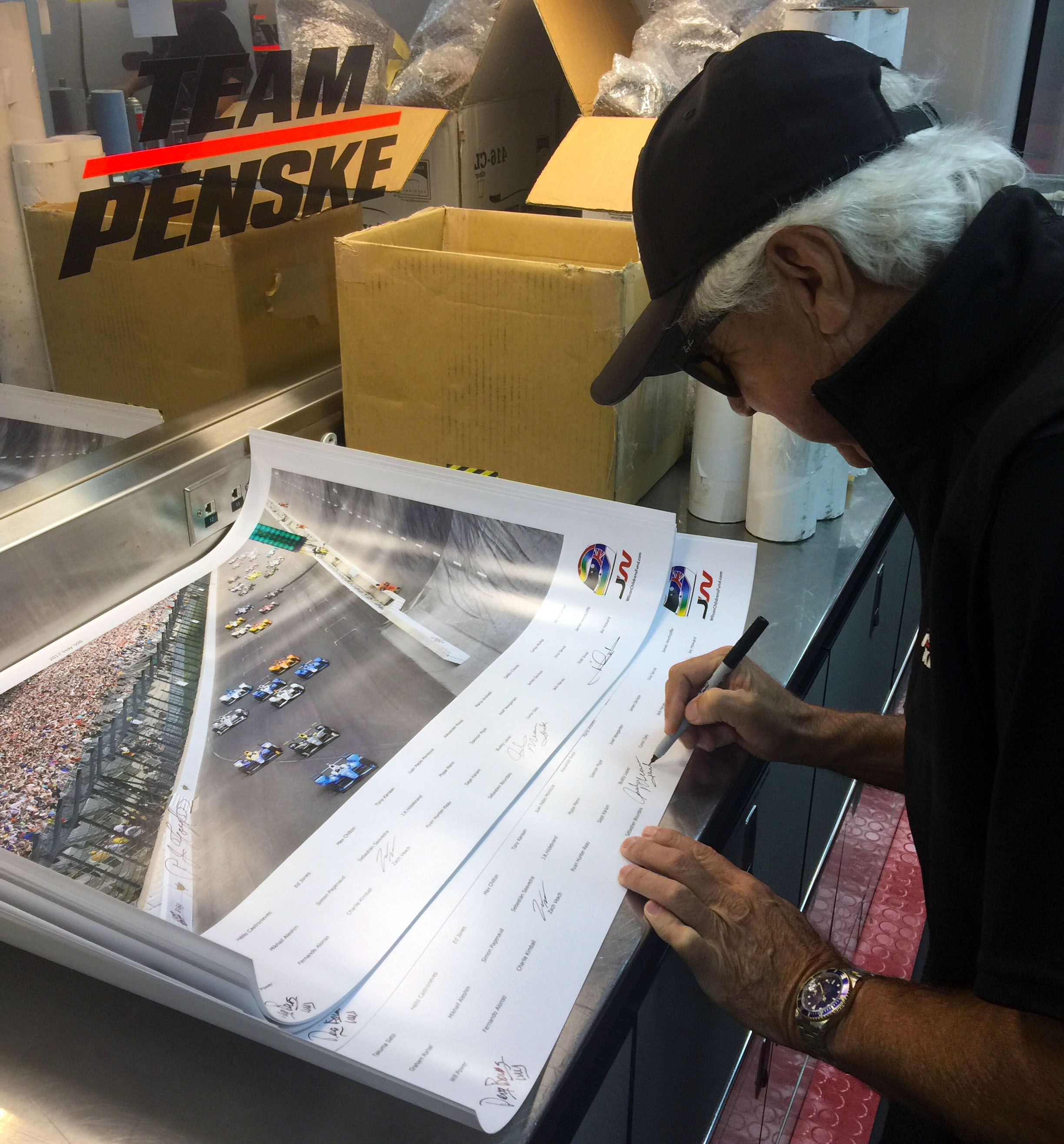 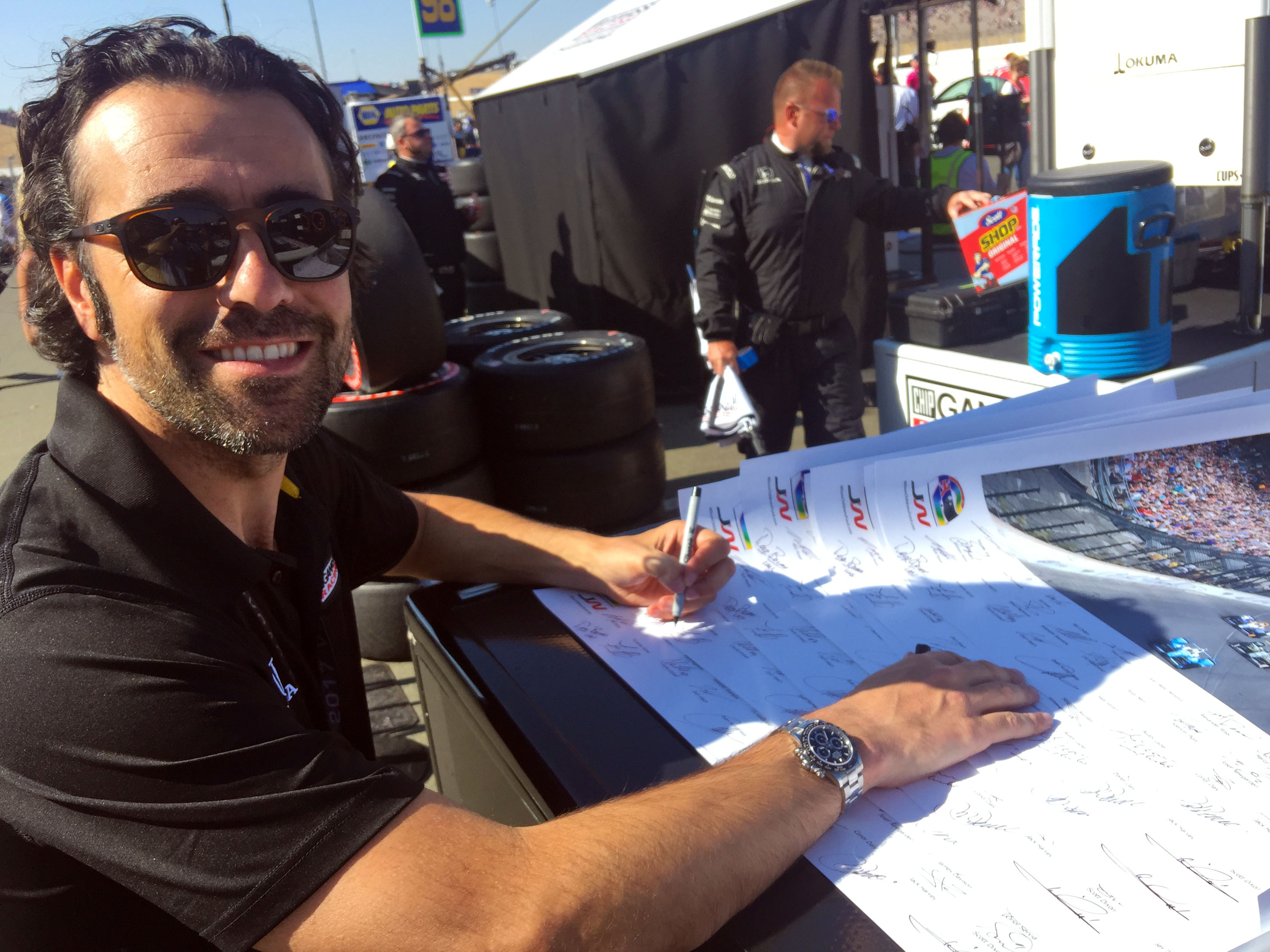 I was fortunate to add one more legend to the Field of 33 print signatures…my dear friend Dan Gurney, aka, the Big Eagle.

In a rather cool sidebar, with autographs from Dan Gurney and A.J. Foyt on the prints, Ford’s winning combo from the 1967 24 Hours of Le Mans is represented… 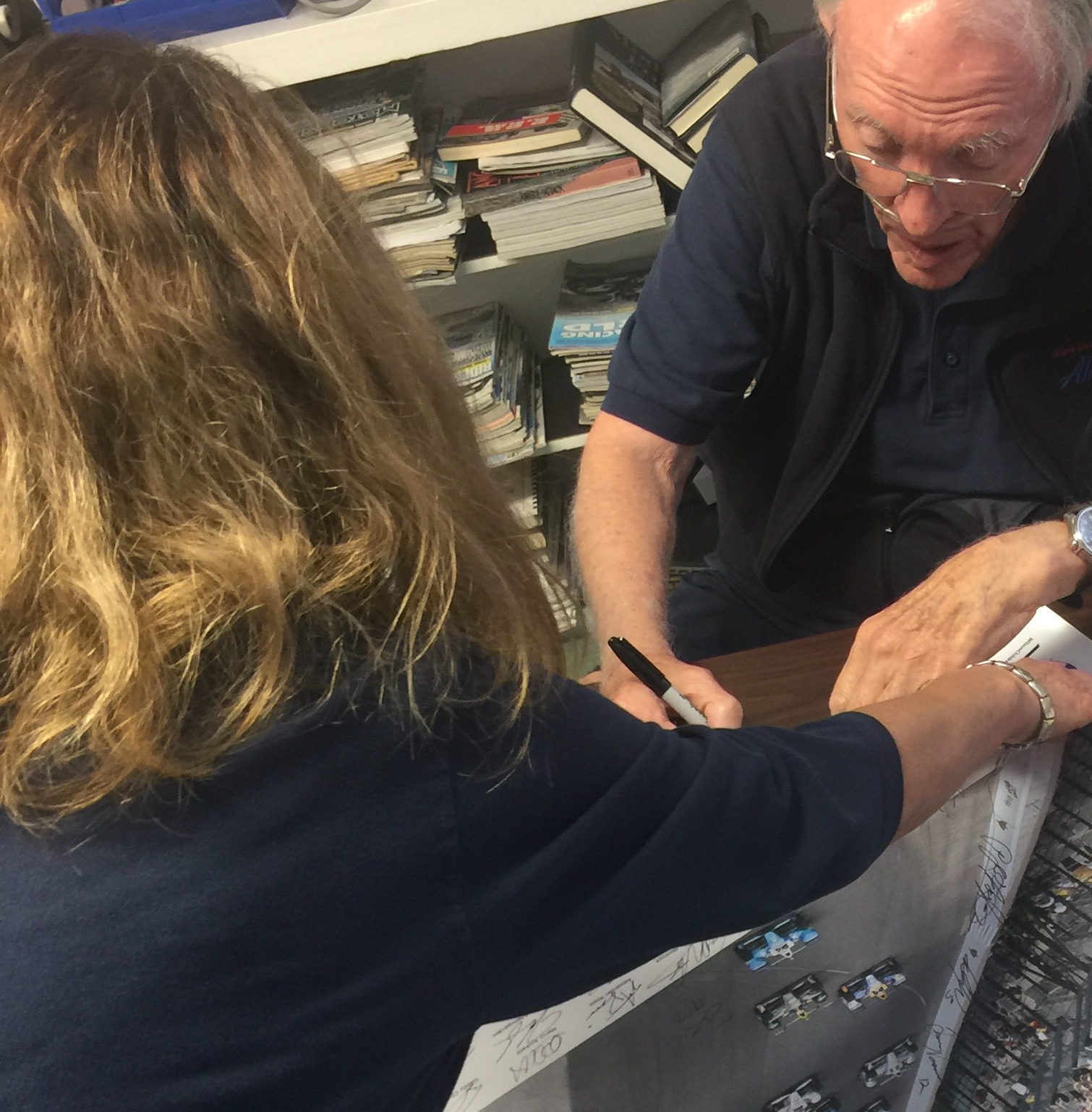